Look what Amber and I saw on our walk today! Image may contain: plant, outdoor and nature 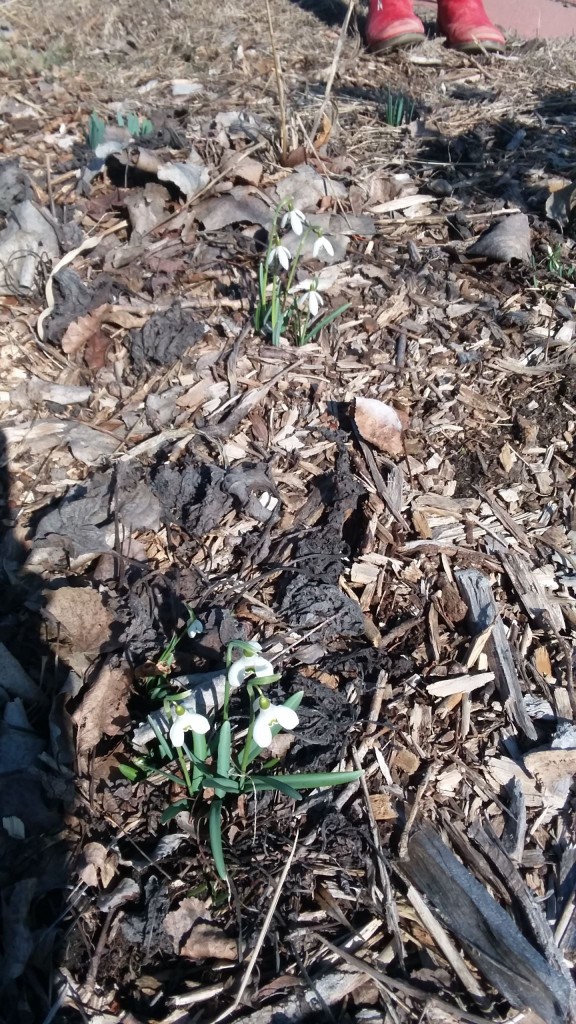 Katie Colman:
Snow drops! Spring is getting very close if these guys are out. Next are Crocuses.

Jennifer Michelle German:
Which, I think, are the green stems in the far back left of the picture.

Katie Colman:
The ones on the left appear to be early tulips in shape but the ones by the cute pink shoes look like it. =)

My Black History lesson is being Whitewashed

My Black History lesson is being Whitewashed. So that there are no aspects “where students are made to feel uncomfortable”.

UPDATE:
Here’s my response to the latest part of my lesson that has been denied approval. Can my peeps please read this and tell me if there are any typos or egregious grammatical errors? Also, what is your opinion? I have to send this in by 11am:

Can you please explain what the issues and problems with the board game are? You told me the problem with the simulation was children and adults playing roles that model racist behaviors. No person is acting out, or modeling, racist behaviors as part of the board game. The children play the game just like any traditional board game: they are rolling a die, moving a piece, and following rules. The content of the spaces and the cards is not different than the content of books they learn from. I don’t see how it is a problem to learn about some of what happened during slavery and the efforts to help slaves escape to freedom. The children are not witnessing nor experiencing anything disturbing. It is all words on paper, presented in a way meant to engage children so they actually learn, and not just read and forget. To not teach at all what happened in our history is to erase it, as if it didn’t matter, or worse, to imply it was okay that it happened and so not worth mentioning.

We made a fort yesterday. :)

Posted on February 27, 2020 by trekker9er
Posted in Uncategorized | Leave a comment

— WARNING: This is long. I may ramble a bit. But it’s because I get excited about this kind of humans in outer space stuff! —

I saw the Hidden Figures movie again a month or so ago. It sent me on an investigation of astronaut history, because I was confused as to how Alan Shepard was the first American in space but John Glenn was the one who became national treasure level famous. And… wasn’t there a another guy in the middle there somewhere? Didn’t I hear the movie say John Glenn was the THIRD American in space? Seriously, how is he the big famous one?

(Side note: Throughout this, when I say American or Russian or Soviet, I mean American human, Russian human, or Soviet human. I did not research when American and Soviet animals were sent into space.)

Yet in all these accomplishments, the U.S.A. remained behind the U.S.S.R. in space achievements. Cosmonaut Yuri Gagarin was, of course, the first human in space (April 1961). He also was the first to orbit the Earth, on that same April 1961 flight. Alan Shepard was the second human in space (May 1961). Virgil Grissom was the third (July 1961).

Finally we get to American John Glenn, who was the fifth human in space (February 1962). The third American in space. The first American to orbit the Earth, 3 times in his 4 hour and almost 56 minute flight. (Side note: Glenn’s flight was NOT cut short from 7 orbits to 3 as the movie portrays.) According to NASA: “Glenn’s flight was a success, and marked a turning point in the competition between the United States and the Soviet Union in space.”

Apparently President John F. Kennedy ordered NASA not to let John Glenn return to space after his February 1962 flight because Glenn was viewed as a symbol of American “prowess”. Presumably the president didn’t want to risk Glenn being harmed or killed. Similar control was being exerted over the famous cosmonauts in the Soviet Union. They practically denied access of those outside of the U.S.S.R. to Yuri Gagarin. And when Gagarin died in an air crash in 1968, Gherman Titov was put on no-fly restriction. This is life altering levels of fame, as in your life is no longer yours to control.

Back to point, as I didn’t see how John Glenn’s flight was any more of a turning point than Alan Shepard’s, given that the U.S.S.R. was still well ahead and seemingly keeping pace, I kept researching. The best I could find on why Glenn over Shepard as America’s leading famous astronaut (until Neil Armstrong set foot on the Moon, of course), comes from CNN. They described it as: “the poise, the presence and that ineffable cool – perhaps best shown when the red-haired Marine pilot emerged from his Friendship 7 capsule on the deck of the destroyer Noa — sealed the image” of a hero.

Whatever it was that made John Glenn the top dog, probably turned out for the best for Alan Shepard. Denied the level of fame that should have come with being first (American) in space, he was NOT denied the ability to return to space. While Glenn was under the public eye and political prestige, which were constant and life restricting, Shepard was free to come and go and work as he pleased. Because of that, Shepard went on to walk on the Moon! He was the fifth human to do so. I can only imagine that Glenn was a bit jealous of that. I certainly would have been.

I have memory of being a child in the apartment that was a 2nd story flat on Sunset Rd, so I was 7 to 11 years old, and getting ready to take a shower. I would turn on the shower then lay down along side the “tub” on the bath mat, which was actually a towel that matched the bathroom towel set, but a little less thick and with serged edges all around, in the size and shape of a bath mat. I laid down on this bath mat towel with the shower running, the shower curtain open, and my head closest to the end of “tub” away from the shower head. While I waited for the water to warm up, I would feel the little drops that bounced out of the shower fall on my skin. Mostly on my face. I vividly remember the tag on that bath mat, which sat just above my eyes, in front of my forehead as I lay. It was white and read “COLORS”, with the C in red, the first O in orange, the L in yellow, the second O in green, the R in blue, and the S in purple. All these colors were strong and bold versions of themselves. I looked at the tag every time I lay feeling water drops while waiting for the shower to warm up. Put the point was to feel the water drops. I remember that it was most always a nice moment.

This is a really fond memory that resurfaced a few months ago. Last month it kept coming to mind, so much that I wanted to do it again. Problem is, my bathroom shower has doors that only let half of it be open at one time, and the toilet is positioned right outside the door that is a the end opposite the shower head. So I have to curl up in order to fit (I’m also much taller than I was in my memory!), and I’m laying in the wrong direction. BUT, I finally got a chance to do it with the girls’ bathroom, which is longer, has a real bathtub, and the toilet is not crammed in. Only problem is, the bathtub has high sides, so very little water was able to bounce out!

All in all, I’ve been able to recreate my childhood memory well enough. Of course I don’t have the COLORS bath mat. But the rest of it I can get close to with a little ingenuity. :)

I forgot how much I like sewing. Glad to have re-found it.

#2) I wanted guacamole for Superbowl Sunday (Feb. 2). Instead I got closure, and was able to put down / out the torch I’ve been carrying for over a year and a half. Tasted just as good.

Who will teach me to be a doctor?

Who will teach me to be a doctor?

I’m such a Geek, lol! LEGO is giving a free ISS patch to Lego VIPs with purchase of the International Space Station set, and I’m just as excited to get the patch as I am the Lego set!

“Nobody else is stronger than I am.
Yesterday I moved a mountain.
I bet I can be your hero.
I am” an ordinary Mom.