I've been collecting my writings from years gone by as I find them. Each time I move - now 5 times in the last 3 years - I find more scraps, loose sheets, etc. with my thoughts from various times in my life. I've decided to copy as many of them as I can here to try and keep from losing them again, and to share with the world. Please feel free to comment as thoughts occur to you. Either send them to trekker9er@yahoo.com or use the comment links here. Thanks, and Enjoy!

Stories I Remember Hearing in College

Freshmen dorms at Harvard are divided up between males and females, one gender per floor, alternating floors, (with males always on the first floor - it's a protection mentality thing). Having said that, apparently there are a couple dorms so long that somewhere in the middle where a firedoor occurs a floor can switch from one gender to the other.

So, one time a female non-student is visiting a friend, staying overnight in the dorm with her friend. The next morning she goes to take a shower. Her friend lets her in the bathroom, then heads back to the dorm room. The girl proceeds to take said shower. When she is done, she walks out to head back to the dorm room. She takes a few steps, and hears male voices coming down the hall. This is when she realizes she does not have a towel in her hand, but instead a washcloth. She turns around to go back into the bathroom, only to find the door is locked, of course. She doesn't have enough time to dash to her friend's dorm room, and so is stuck, quite naked, in the hall with two males about to see her. What do to?! The washcloth isn't large enough to cover everything that needs to be covered. There's no where to hide.

Her last brilliant thought before the two round the corner is to put the wash cloth over her face. So when the two males rounded the corner, they saw everything, except whom she was. The girl proceeded face covered down the hall past them to her friend's room to anonymous safety.

A student overslept the start of one of his final exams. He, of course, jumped up and raced to the exam, showing up an hour or a little more late. At Harvard finals are typically three hours long, a student may arrive up to an hour and a half late, and no student may leave for the first hour and a half (to prevent cheating).

The student proceeds to take the exam. At the end, "All pencils down" is called as usual. As part of the prevention of cheating, any student working past this point automatically fails. Well our friend continues working because he wasn't finish due to having been so late. In large classes it can take up to half an hour for exams to be collected, and after that the teaching assistants and the professor still have to pack up the hundreds of exams. So even after the exams had been collected the student kept working on the exam. When he finally finished it, he walked down to the front where the TA and Prof were sorting and packing exams. The Professor refused to accept the exam and told the student he had failed. The student said "Do you know who I am?" The professor regarded him for a moment, then said "No."

The student reached out to a stack of exams, picked up the top half, placed his on the remaining part, then put the top half of the stack back down, and walked away.

Of course we also have the story that most colleges have of the students who missed a Science final because they were out partying somewhere. In our case, the two were down South on a beach the week/weekend before the final. (Harvard has a two week stint of no classes before final exams called Reading Period. Little work gets done unless a TA or Prof decides to hold classes during Reading Period anyway.)

The day of the final the two students "race" back to school, well missing the final by several hours. They find the professor and "explain" how they missed it because they had been on vacation and on the way back that morning the car got a flat tire, there was no spare in the car, and by the time AAA arrived and they were towed and got a new tire it had been several hours. The professor accepted their story and told them he would give them the make up exam the next day. The two were quite relieved and agreed.

As a note, it is common knowledge that make up exams are not at all the same as the final exam handed out at the actual final, again to prevent cheating.

The next day they show up for their make up exam. The professor hands them each a makeup exam, and then sends them to separate rooms to take the exam. Each student opens to the first page, where it says "5 points:" and proceeds with a standard easy answer type science question. However, there is only one other page in the exam. When the students each turn to it they see "95 points: Which tire?"

The two students failed to put the same answer for the second question.

I don't remember if I was a freshman or sophomore, but during one of those years I was walking with a few male college friends of mine (which was a pretty frequent occurrence as in the Engineering major I was one of only two females). I think we were talking about what people were going to do that weekend. Whatever it was, the subject of going to a party came up. But Harvard rarely has student parties that actually last any length of time. No, the real parties were always over at MIT. After all, they brewed their own beer. There was later rumor that they made their own drugs also, but that one was never confirmed to me.

It was at that moment one of the guys turned to me and told me I could not go to any MIT parties. Ever. When I started to pull out the "What! Why not?" I can do whatever I want - thing, the rest of the guys with us backed him up. They forbid me from going to MIT parties. When they finally got around to telling me why, I found out that at an MIT party in order for a guy (perhaps just a Harvard guy) to get in he had to bring two girls with him: one for himself and one for someone else.

Me, if I were made by Lego 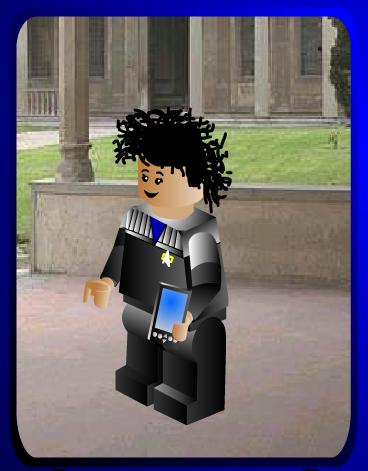 Which one of me is your favorite?


Want to make yourself as a Lego person?