Rough estimates put attendance at 3,000+. We were expecting maybe a little over 1,000… So, our plans for this event were shot away. Enough people had shown up far enough in advance the library couldn’t even set up two of the demonstrations we had planned, nor could they put out most of the children’s craft activities. But we managed to get through it!

After a lot of people grabbed glasses and bailed – despite knowing there were not enough and we were asking people to share – there Were a handful of attendees that shared eclipse glasses with all the others who didn’t get any. I saw one person who brought their own pair sharing. Good people. And, I’m happy to say, despite all the glasses hunting, we had a very peaceful acting crowd in whole. No issues there at least!

The best part, for me, was watching the faces of people light up and listening to their reactions when I gave them my eclipse glasses to look at the Sun for a moment. From young to old, the reaction was almost always the same. Amazement, exclamations (of varying strengths), and joy. :D

I have, however, officially experienced warnings signs of dehydration. Not. Fun.

Seeing the glowing gold eclipsed Sun with my own eyes… priceless.

Thanks to my Dad for the pictures. 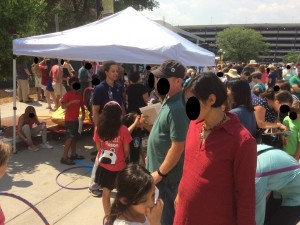 This entry was posted in Pictures, Space. Bookmark the permalink.